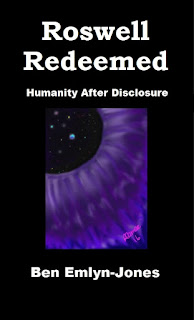 I have published a new book that is entitled  Redeemed- Humanity After Disclosure. See: http://hpanwo-bb.blogspot.com/2018/12/roswell-redeemed-is-here.html. It is a sequel to Revealed- a World After Disclosure, which means it is the third part of a trilogy. I've decided to do the same thing as I did with Rising and Revealed: put up a sample first segment online. This will hopefully give readers an idea of what the book is about and encourage them to purchase the complete book. For those of you who have not read the first and second novels, I advise you to do so before reading this sample or the third novel because it is a continuation of the same story and also contains a few spoilers about the first book.
See here for details on how to buy Rising: http://hpanwo-bb.blogspot.co.uk/2016/08/roswell-rising-is-here.html.
See here for details on how to buy Revealed: http://hpanwo-bb.blogspot.co.uk/2017/10/roswell-revealed-is-here.html.
I hope you enjoy the sample below.